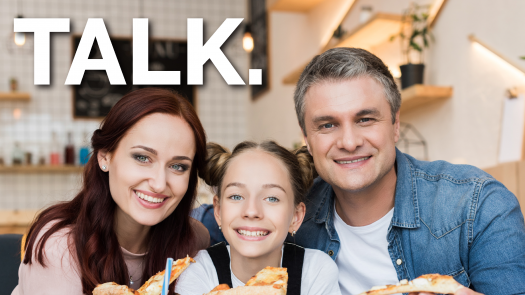 A countywide campaign urging parents to talk with youth about risky behaviors like underage drinking is being launched August 1. The “Talk. They’ll Listen” campaign will be seen on social media, billboards, flyers and posters, aired on radio ads and blasted out to parents and caregivers through the schools. Community coalitions will help spread the message and placemats will also be distributed through restaurants around the county. A countywide website (talktheywilllisten.com) is also being launched on August 1. The website will contain tips about how parents can start conversations with youth about underage drinking along with resources and connections to community coalitions.

Only 57% of Wayne County parents have talked with youth about alcohol, according to the most recent youth survey. “That’s a number we’d like to greatly increase,” said Trish Staiger, Director of the federally-funded project. The simple act of talking, listening and sharing information can have a direct and large-scale impact on underage drinking and other risky behaviors, Staiger said. And youth really listen to their parents. In fact, 80% of youth say their parents have the most significant impact on whether they drink. Survey statistics have shown alcohol is the most commonly used substance among youth.

The campaign is organized through OneEighty and promoted through the Wayne County Impact Group comprised of agency representatives working on alcohol prevention among 8th and 10th graders. Survey results show numbers spike in underage drinking between 8th and 10th grades: 15% of 8th graders said they drank in the past 30 days and for 12th graders that number rises to 21% or nearly one in four.

The campaign was funded through a three-year grant from the Substance Use and Mental Health Administration (SAMHSA) and administered by Ohio Department of Mental Health and Addiction Services. OneEighty has been the lead agency in Wayne County overseeing and coordinating grant efforts. The grant ends in September, but the work will be sustained in the coming years through partners and coalitions.

For more information on the campaign, including getting materials, visit waynecountycoalitions.com